Personal Challenge #6 The Truth About Bulldogs

On the Care and Keeping of Humans

This is a work of fiction, any resemblance to reality is probably a figment of your imagination.

Image sources may be found Here. Once again, many thanks to John Gray for kindly letting me use his photograph, you can visit him Here!

(Taken from the lectures of the renowned Miss Eliza ManyFolds, longtime Keeper of the human: John, discoverer of the Bulldog penchant for buttered toast crusts.) It is a little known fact (among humans) that we of the Bulldog race rule the world. Any person of good sense would realize this, which naturally excludes those with homo sapiens tendencies; they have yet to make the simple discovery that we are perfectly capable of understanding their endless talk. Nor have they figured out that we are perfectly capable of speech, we simply choose to be taciturn with bipeds. Frankly, their hairy cousins aren't much better, being mostly full of nonsense; outwith the great apes of course, although it may simply be that their size gives them a certain dim dignity, but I digress . . .

Among our many backstairs operations is the covert protection and guidance of certain important humans. Scoff if you like, even among the humans there are individuals who can manipulate their world to make it a more pleasant place, which makes them important. For instance, where would the proud Bulldog race be without the male who invented sandwiches or the delightful female who invented the Scotch egg, hmmm? It goes to prove that even the most disadvantaged creature can rise above their circumstances, if given the proper guidance, discipline and affection. That they have opposable thumbs simply adds to their usefulness. Keep that firmly in mind, pups, should you find yourself in charge of one of the unfortunate two-legged; protect those thumbs!

As well, do keep in mind and have patience with their rather simple-minded assessment of our race's intelligent, good looks as 'cuteness' and the oft-times regrettable actions taken as a result. For example: Yes students, my human, dear as he may occasionally be, affronted my dignity by offering me a sandwich (why else would he have left it lying on the coffee table unsupervised?) then called me by the peculiar name he gave me, Petunia of all things, with camera in hand. You must rise above these occasions as best you can, as I did. 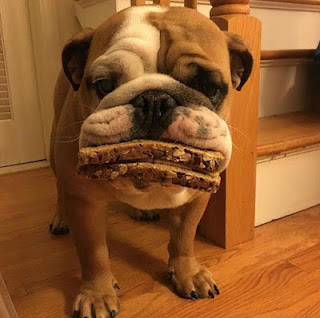 If they become too profligate with their buffoonery then one may take corrective action which is appropriate to the offense. Refusing to make eye contact is good, especially if you hide your face against a wall, as is passing gas in their direction. Use your Bulldog creativity to maintain the ascendancy over your charge. In fact, during a particularly galling incident where my male tried to feed me a noxious mixture of sliced bread and something he referred to as Spam, I climbed surreptitiously into his bed and shat on his sheets. He never again tried to feed me that mess, let me tell you! Remember: You must remain in control of your temper! Never let a silly two-legger make you forget your inherent dignity and restraint so much that you nip or bite; a biter has lost control of the situation and may never regain it.

There is one more responsibility that a Keeper of Humans must be aware of at all times: the human tendency to become unhappy for oft-times inexplicable reasons. One may apply to the Institute of Humanalysis for help, but you may find it to be both quicker and more effective to attempt some simple remedies of your own. Is your person getting enough exercise? It is reasonable to suppose that those with only two legs lack the stamina that we with four are happily blessed with, but this doesn't mean they don't require regular and adequate exercise. Lack of exercise can lead to such things as: lethargy, loss of appetite, depression, and constipation. Don't let your human suffer needlessly!

In addition, your biped may suffer from unmet mating urges stemming largely, so some suppose, from the female being always in heat. I know, it sounds quite ridiculous to us and a good deal of research has been done as to why humans attempt to control these needs so rigidly; they can, after all, manipulate the frequency of births and (mostly) the number of pups they have. I suspect we will never have a truly definitive explanation for human mating peculiarities, but, regardless, if they are stifling their own needs, then it is incumbent on us to take action, albeit subtly. Before we end this lecture, it may be helpful to share an example with our perspicacious Trainee Keepers, from my own experience. It would be quite helpful if young Keeper Michaelangelo BumbleButt joined me on the Speaking Lawn. 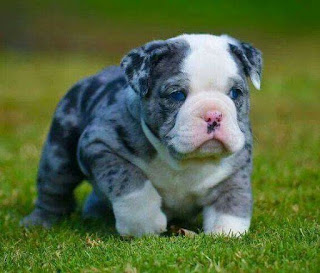 He and I both hold responsibility for human adults who were desperately suppressing mating urges and both were suffering from it terribly. As is often the way with these odd creatures, both worked unimaginably hard at not allowing their loneliness to show. Fortunately for them, there's no fooling a Bulldog nose. Equally fortunately, Michaelangelo and I often met at a nearby park for frolics and to discuss our humans. (Remember pups: If you meet a Bulldog with a human companion, that biped is important for some reason.)

After a bit of casual chat about the interesting smells our people could produce, my young friend opined that his person was showing definite signs of repressed mating urges. On further questioning, he admitted that the incessant playing of 'Aida' had worn down his nerves to the extent that he had considered biting his charge to make it stop. Having been subjected to bouts of operatic overload myself, I could certainly sympathize, but vehemently warned him not to descend to the level of biting. After a bit of discussion, we came up with a reasonable plan and young Michaelangelo trotted off to initiate the first part, stopped and turned to face me again: “So, Miss Eliza, is it true your veterinarian said you have a fanny big enough to park a Mack in?”

The cheeky wee devil certainly pulled off that maneuver brilliantly! How he heard that unfortunate tale baffles me to this day, but it certainly gave me incentive to chase him down with murder in my eye. As agreed, when our respective companions dashed up, I managed to wrap my lead around my John's ankles whereupon he fell right into the arms of the charming young Professor he'd been sighing over for days. Whilst it may not have been quite what humans refer to as 'love at first sight', they had their first anniversary a fortnight ago. So keep a stiff upper lip young pups, we Bulldogs shall ever prevail and the world will be better for it!

And with that, I am taking a week off from writing, although not from blogging. In the meantime I will attempt to decide on a better way to plan my writing time.
Posted by The Cranky at 6:09 PM

Email ThisBlogThis!Share to TwitterShare to FacebookShare to Pinterest
Labels: writing